Tonya Ringo, RN, CSO, is a registered nurse uniquely equipped to care for patients at UF Health Shands Children’s Hospital. She knows exactly what it’s like to be the chronically ill kid in and out of the doctor’s office.

At just 10 years old, she was diagnosed with scoliosis and fitted with a cumbersome back brace at the same hospital she works at now.

That brace frequently cracked and wore out thanks to constant use and the smothering Florida heat, so she returned often for repairs and checkups. While most kids dread visits to the doctor, Ringo embraced them at a young age thanks to her physician, Robert Bright, M.D., one of the nation’s top pediatric surgeons at the time.

In contrast to the non-stop teasing Ringo endured at school, she found a welcoming environment with her pediatric orthopaedic team. Before long, she developed a close bond with Bright.

“He was just a very sincere and caring doctor,” Ringo said. “He always told me, from the start, that I could do anything.”

Ringo took inspiration from Bright’s compassion, and she soon grew interested in the medical field.

When she told Bright she wanted to be a pediatric nurse, he encouraged her.

“He kind of became my mentor,” Ringo said. “He just shared his medical stuff with me and said that it would be terrific if I took up the medical field.”

After a few years, however, Bright moved to Baltimore.

Ringo was then placed under the care of a new physician who was less enthusiastic about her aspirations. He told her nursing was too demanding of a job for someone with her back problems, but Ringo did not let it deter her.

Ringo corresponded with Bright through letters, and would eat lunch with him when he came back to Gainesville every six months. All the while, however, Ringo’s scoliosis was worsening. By the time she was in 10th grade, her spine had fused from the base of her back all the way up to chest-level. So, Ringo and her family drove to Baltimore to see Bright for surgery.

The operation was a success, though Ringo was forced to wear a cast covering her chest down past her hips for six months. After her long recovery, Ringo finished high school and went straight to nursing school, just like she’d always wanted.

“My dream was always, after all I’d been through, to really help kids and hopefully help somebody feel as loved and cared about as Dr. Bright made me feel,” Ringo said.

After 22 years as a float nurse at UF Health Shands, she has found the work to be just as fulfilling as she hoped. She said she enjoys seeing the resiliency from the children she works with, especially when they are facing difficult health issues.

“There was a little guy, he was only 4 at the time, who came in with a bad heart,” Ringo said. “He was in Shands waiting on a heart transplant, but seeing him so sick and then getting a heart and getting all better, that’s the most rewarding thing ever.”

Ringo’s peers recognize her quality of care. Jennifer Elder, RN, CSO, said Ringo helped her feel welcome when she started as a floating nurse at Shands in 2015. She said Ringo extends that same kindness to her young patients.

“She has a heart of gold,” Elder said. “She’s compassionate. I think she really was meant to work with kids.”

Unfortunately, Ringo’s dedication to nursing was put on hold when doctors found a suspicious lump in her chest during a routine mammogram in 2012. The diagnosis — breast cancer. Ringo needed to start treatment immediately.

She underwent radiation treatment for a month and a half, taking paid time off for the first time in her career. During the long hours in treatment, she struck up a conversation with one of the radiation technicians, and the two quickly became friends. Now, Ringo said, they are as close as family.

Decades earlier, Ringo might not have even said a word to her technician, but after years of health care service, she said she has opened up.

“I used to be the shyest person that you could ever find,” she said. “I think nursing has really brought me out of my shyness. I love to talk to people. I love to help people.”

Ringo’s doctors told her she was cancer-free after the treatment, but during her final six-month follow-up appointment, they found another suspicious spot in her chest. It turned out to be invasive cancer that may have spread to her whole body.

“I was devastated,” Ringo said.

Her physicians removed her lymph nodes, then performed a successful mastectomy and reconstruction. After six months of recovery, the cancer was gone, but the complications continued.

Ringo started experiencing severe chest pain and trouble breathing. Her doctors discovered that the radiation from her first bout with cancer had caused scar tissue buildup that blocked off her main artery. She had to have four stents put in to open it up.

Ringo credits her recovery to her faith, her radiation therapist and the people closest to her. Her mother, who has also dealt with a spate of chronic medical issues, has given her strength and someone to relate to.

Ringo’s best friend helped her through her cancer diagnoses. She was a NICU nurse at UF Health Shands Children’s Hospital who was also diagnosed with breast cancer. The two labeled themselves “cancer warriors,” sticking together through their treatments.

“She even went to my appointments with me and took notes for me so that I could listen to the doctor and not have to worry about remembering stuff,” Ringo said.

However, Ringo’s friend passed away from pancreatic cancer not long after Ringo’s second cancer diagnosis. Ringo has tried to honor her through her patient interactions and subsequent cancer walks.

Despite decades of illness and loss, Ringo continues to provide care, day in and day out.

“I’ve had a lot of medical issues, but it’s just made me want to give back all the help that I’ve gotten,” she said. 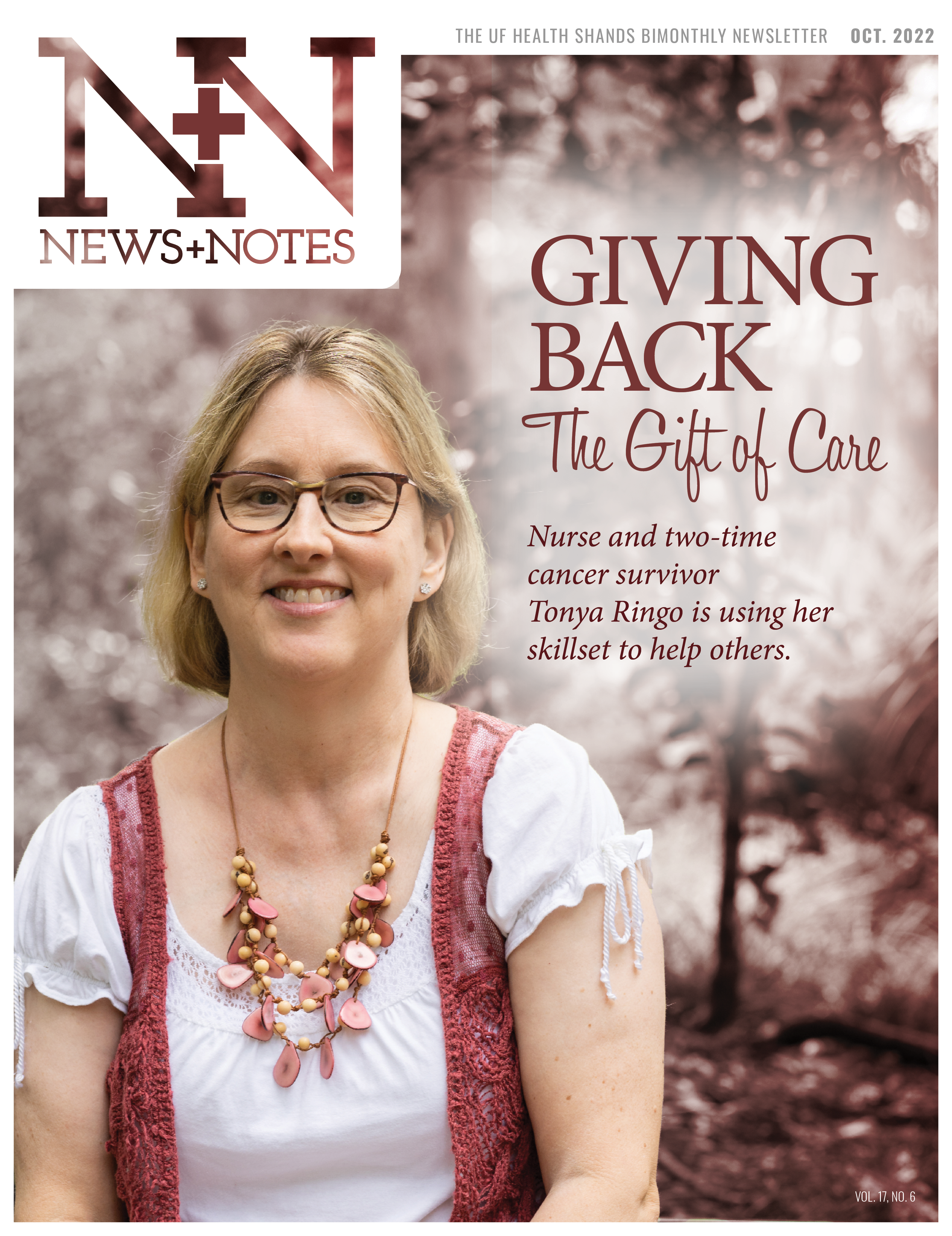