Dehouske worked as a pediatric nurse at UF Health Shands Children’s Hospital for almost 20 years, in addition to serving on the faculty of the Santa Fe College Nursing Program. Recently, she found out what it was like on the other side of patient care. She also found out about UF Health Cardiac Rehab.

In April last year, Dehouske came to the UF Health Shands E.R., unable to walk even 10 steps. Our medical team diagnosed diastolic dysfunction, a form of heart failure in which the heart cannot relax properly.

“Up to that point, I really thought of myself as a healthy person,” Dehouske said. “It hit me like a ton of bricks and I got pretty scared.”

After the years she spent caring for others, she felt strange being the one who needed care.

“I was always the one who did everything. I was strong and did everything that I wanted to do,” she said. “I thought ‘I can’t be sick. I’m the nurse.’”

After having 13 pounds of fluid removed, Dehouske stayed in the hospital for a week. After she was discharged, her family physician ordered 36 sessions of cardiac rehab, three days a week for 12 weeks.

“It was so good for me because the UF Health Shands Cardiac Rehab team was very encouraging,” she said. “They monitored my heart as part of the program, which made me feel safe while I was exercising.”

What helped her the most, she said, was the sense of security she had knowing her heart was being monitored. She also benefited from the knowledge the cardiac rehab team provided.

“They taught some classes on salt restriction and gave me information and recipes,” Dehouske said. “I’m a nurse, so I knew a lot of what they were telling me, but it hit home because I was at a place where I needed it.”

Jeff Plasschaert, M.S., CSCS, a UF Health Shands exercise physiologist, has seen 47 patients graduate from the program since it opened in July 2016. The staff helps heart patients learn how to manage their health with exercise, nutrition and psychosocial support.

“Our patients are told to change a lot about their lifestyle, and so we guide them through that process,” Plasschaert said. “We help them become more aware of nutrition labels, how much exercise they need and different ways to relax and manage stress.”

Plasschaert helped care for Dehouske when she went through the program.

At first, she was very nervous about exercising because she didn’t know if her heart could take it. After Plasschaert gave her more information on her exercise limitations and options, she felt much more comfortable.

“She went from walking on the treadmill for only a few minutes, to walking for 30 minutes and doing interval training on the recumbent cross trainer,” he said. “She lost 25 pounds and it was very rewarding to see her attitude change throughout the program.”

Dehouske still works out five times each week and carefully watches her diet.

“Now that I’m not working, my job is to take care of myself,” she said. “I don’t know how I could have done this without the program to guide me through.”

Visit UFHealth.org/cardiacrehab for more information about the program.

Q&A with the CEO – Ed Jimenez

Curious to know what’s on the mind of our UF Health Shands CEO?
By Ed Jimenez 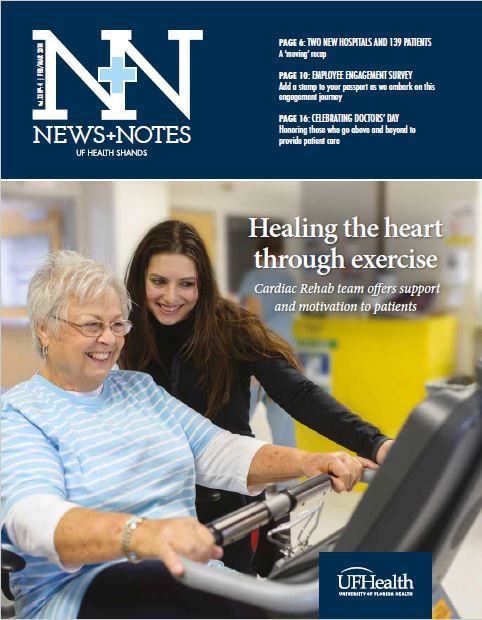