Fifteen years ago, I learned my father had Parkinson’s disease. He was only in his mid-50s, making the news especially shocking. My parents did their best to explain the prognosis, but after further research, I discovered that it was more serious than I’d realized. There’s no cure for this unforgiving condition. Parkinson’s disease slowly attacks your brain — taking your memory, movement and independence with it. You’ve probably seen the effect it’s had on a number of celebrities, including Michael J. Fox and the late Muhammad Ali.

Eventually the shock wore off and life went on. I moved from Florida to Indiana with my future wife. Living far from home, I only saw my parents a few times a year. Each time I did, my father’s condition had worsened. Sometimes the disease’s progression was more apparent than others, but it was clearly taking its toll.

In 2011, my wife and I moved to Gainesville to be closer to our families. My wife’s colleague, whose brother was also battling Parkinson’s, invited her to attend a talk about the research being done at UF Health to combat the symptoms and progression of Parkinson’s.

The speaker was neurosurgeon Kelly Foote, M.D., co-director of the UF Health Center for Movement Disorders and Neurorestoration. He spoke about dyskinesia, a symptom of Parkinson’s disease marked by involuntary movement due to overmedication. He showed a video of the positive results experienced by a patient who had undergone a procedure called deep brain stimulation surgery, or DBS. The presentation shocked my wife and she encouraged my parents to schedule an appointment for evaluation.

Within a year, my father became a patient of Foote and neurologist Michael S. Okun, M.D., chair of the department of neurology and national medical director of the Parkinson’s Foundation. Both are considered international pioneers in the development and refinement of this therapy. My dad eventually had DBS surgery on both sides of his brain. During the procedures — performed in stages over several months — electrodes were implanted in his brain and a pacemaker-like device was placed in his chest to communicate with the electrodes. Electrical currents created in the brain by the DBS leads helped to regulate the abnormalities causing the symptoms of Parkinson’s. My father’s results have been tremendous. The symptoms have significantly improved and the disease’s progression has substantially slowed.

I am so pleased that Foote, Okun and their entire interdisciplinary team — who were all instrumental in helping my father get back to a more active and meaningful life — are highlighted in our new Problem-Solving Care brand campaign (see page 4). This team is full of “true innovators” who are empathetic and committed to improving the lives of their patients. I hope that showcasing their work will prompt others with loved ones who are suffering to explore DBS and other life-altering treatments.

Visit ProblemSolvingCare.org and bridge.UFHealth.org/problem-solving-care to learn more about the next phase of our UF Health branding efforts.

Todd joined the Strategic Communications team in 2014 and serves as editor of News+Notes, the UF Health Shands internal newsletter. He assists with internal, business, public affairs and issues/crisis communications; supports internal clients; serves on the media on-call and emergency response teams; manages the team’s internship program; and loves semicolons. He previously served as a public relations associate for UF Performing Arts where he managed social media and e-communications, developed web content and wrote copy for a variety of platforms including brochures, performance programs and advertisements. During his time as a journalist, he covered the Indianapolis Colts, Indiana Pacers, Indianapolis 500 and the Brickyard 400. He holds a bachelor’s degree in sociology from the University of Central Florida and a master’s degree in journalism from Ball State University.

Thousands of employees pitched in to maintain quality care, service and operations throughout the crisis. 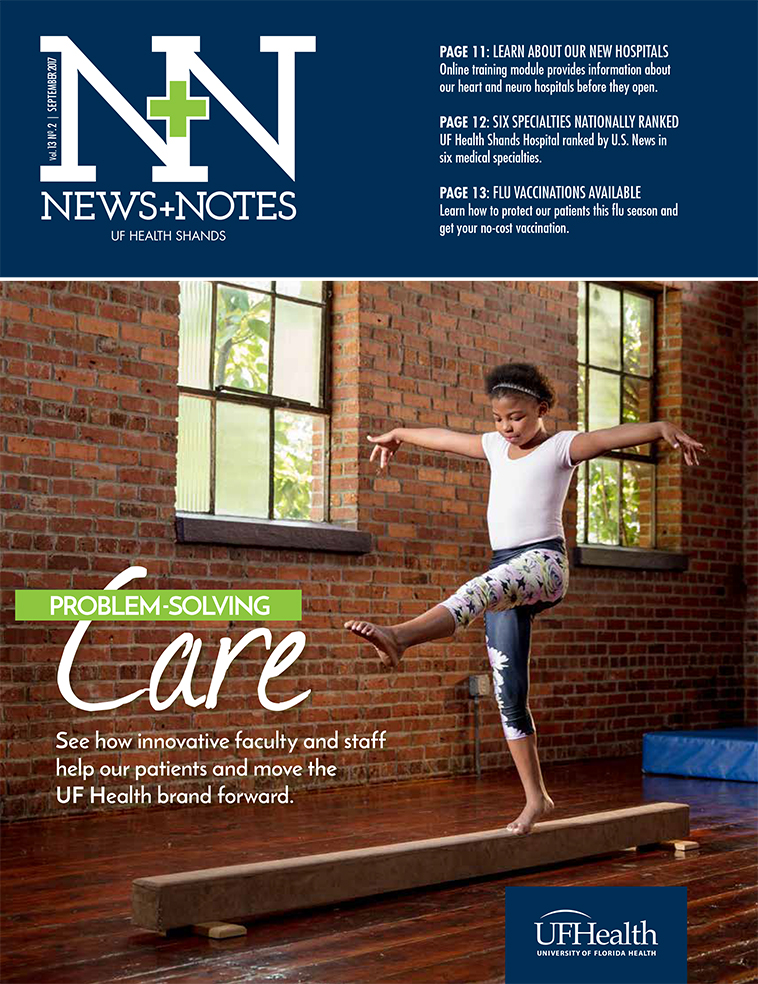