UF Health’s pediatric cardiology and heart surgery program earned a historically high ranking, moving up three places to 21st in the country. Five other UF Health pediatric specialties remained among the nation’s elite programs in the 2017-18 rankings: diabetes and endocrinology (23rd), pulmonology (33rd), cancer (46th), neonatology (48th) and neurology and neurosurgery (49th). The cancer and cardiology and heart surgery programs are also the highest-ranked among children’s hospitals in Florida.

“It’s fantastic to see that we are viewed as a national leader in so many programs. It’s especially gratifying to have our cardiology and heart surgery program, which has been recognized by other organizations as one of the nation’s best, continue to rise and flourish,” said Scott Rivkees, M.D., UF College of Medicine department of pediatrics chair and UF Health Shands Children’s Hospital physician-in-chief.

Rivkees attributes the cardiology and heart surgery program’s higher ranking to its overall excellence in every aspect of cardiac care as well as its continued successes with heart transplants. UF Health Shands Children’s Hospital is one of the busiest pediatric heart transplant centers in the U.S., he said.

“When families in Florida are looking for a place to have their child’s complex cardiac conditions treated, these rankings are affirmation that they should look to UF Health,” Rivkees said. Mark Bleiweis, M.D., UF College of Medicine pediatric and congenital cardiovascular surgery chief, said it is extremely pleasing to have the pediatric cardiology and heart surgery program recognized yet again for its commitment to excellent care.

“Our team includes some of the country’s leading specialists and researchers, and they pride themselves on bringing the most innovative treatments and latest findings to patients,” Bleiweis said.
“Their hard work, dedication and expertise are what continue to make UF Health Shands Children’s Hospital one of the nation’s top locations for pediatric heart patients.”

The rankings in six pediatric specialties are a reflection of improvements in patient outcomes that have been sustained for several years, according to Rivkees.

“These rankings demonstrate the dedication and determination among our physicians, nurses and staff. Their commitment to excellence is one of many reasons that a growing number of people are choosing UF Health Shands Children’s Hospital when their child needs exceptional medical care,” said Ed Jimenez, UF Health Shands CEO.

Also in June, UF Health Shands Hospital received the highest rating from The Society of Thoracic Surgeons for its patient care and outcomes in congenital heart surgery. The distinguished three-star rating puts the hospital among the elite for congenital heart surgery in the U.S. and Canada. The analysis reviewed outcomes and patient care data from January 2014 to December 2016.

A lifeline for Caden 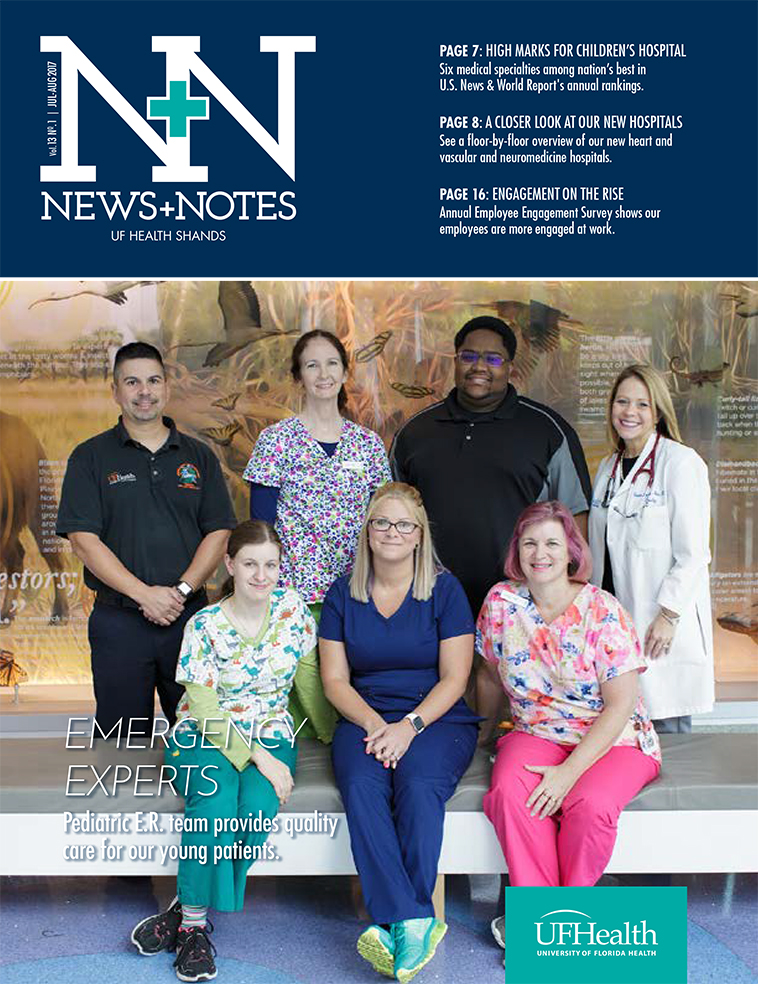