Another indication that we’re building a reputation as an employer of choice is the number of employees who are returning to work with us. In the past year alone, we’ve rehired 262 former employees at UF Health Shands. Here, we recognize a few of these “return employees” whose stories embody what makes UF Health a great place to build a career.

Christine Cassisi began working at UF Health Shands in 1981 as a patient advocate. Eight years later, she left our organization to pursue her M.B.A. in Chicago. While pursuing her degree, she worked at Mercy Hospital as a patient advocate. She then worked in logistics and supply chain for Levi Strauss & Co. and Greatwide Trucking.

Cassisi missed the challenges of working in a teaching hospital and returned to UF Health in December 2009 as the manager for the BEST, or Building Excellent Service Together, customer-service initiative at UF Health Shands, which preceded Hospitality & Service.

She couldn’t pass up the opportunity to help strengthen a culture of hospitality and service during an exciting period for the organization — just six months following the arrival of David S. Guzick, M.D., Ph.D., UF senior vice president for health affairs and UF Health president.

“The whole idea of better integrating the College of Medicine and the hospital was what really attracted me and why it was so important to come back,” Cassisi said. “I really missed the cutting-edge environment of an academic health center.”

Soon after her return, Cassisi’s position evolved to become the director of the Patient Experience team. She oversees patient advocates, language access services for our limited English proficiency patients and patient and family advisory activities.

“I think this is a challenging environment in the best possible way,” Cassisi said. “We are working so hard because we’re doing well. Patients come to us and trust us.”

In 2002, Alphonso Miller joined the UF Health Shands Hospital Food and Nutrition Services team. He delivered meal trays to patients, verified dietary needs and worked as a cashier in the cafeteria.

“I was just happy to be within the organization,” Miller said. “Working in food service was so fun.”

In 2006, Miller transferred to UF Health Physicians as an office representative, where he took patient calls, set appointments and facilitated the patient check-in process. Four years later, he became a financial counselor, handling billing and insurance for UF Health Physicians. When UF Health transitioned to EPIC, the electronic medical record system, Miller became an information system specialist. While in this role, he earned his master’s degree in health service administration and interned with UF Health Physicians Informatics.

Following graduation, Miller accepted a position at Nemours Children’s Health System in Orlando to help implement EPIC in acquired pediatric clinics throughout Central Florida, but he always eyed a return to Gainesville. Two years later, the opportunity arose. With the end of the EPIC implementation process at Nemours closing in, a position opened on the UF Health Physicians Informatics team where he had interned. Miller was offered the position and returned to UF Health in February.

“I’m grateful that there’s so much opportunity for growth,” he said. “I started out with the lowest pay grade. I made the climb I have because of the opportunities I’ve been given.”

After studying English at UF, Fleury Yelvington worked in the Jacksonville Mayor’s office and met chief financial officer Eugene McLeod, a UF graduate, who was leaving to work for UF Health Jacksonville.

“If you get your master’s in hospital administration, I’ll hire you,” she recalls him saying.

Yelvington earned her degree, and McLeod kept his promise. She was recruited to UF Health Shands, where she served as director of clinical services from 1989 to 1993. She then left to become chief operating officer at St. Joseph’s Hospital in Tampa.

“I would never have left, but when you are striving to be a CEO, you have to take that kind of opportunity,” she said.

Yelvington went on to become a top administrator at St. Mary’s of Michigan before fulfilling her dream and serving as CEO of Carondelet Health in Kansas City from 2007 to 2014. After the organization’s sale in 2014, she returned to Gainesville as UF Health Office of Development director of operations.

“I loved all of my hospitals, but there’s just an energy in a teaching hospital like UF Health Shands that’s unique. I’m so grateful to be back here,” Yelvington said.

Her ties with UF Health go beyond her occupation. While Yelvington was working at St. Joseph’s Hospital, her mother suffered a hemorrhagic stroke. The head neurosurgeon said her mother’s best chance for survival was to receive treatment at UF Health Shands. Her mother’s surgery was successful, and she made a full recovery.

Yelvington said, “I was watching how everyone was treated. This organization really rallies around our families and patients.”

We learn by doing 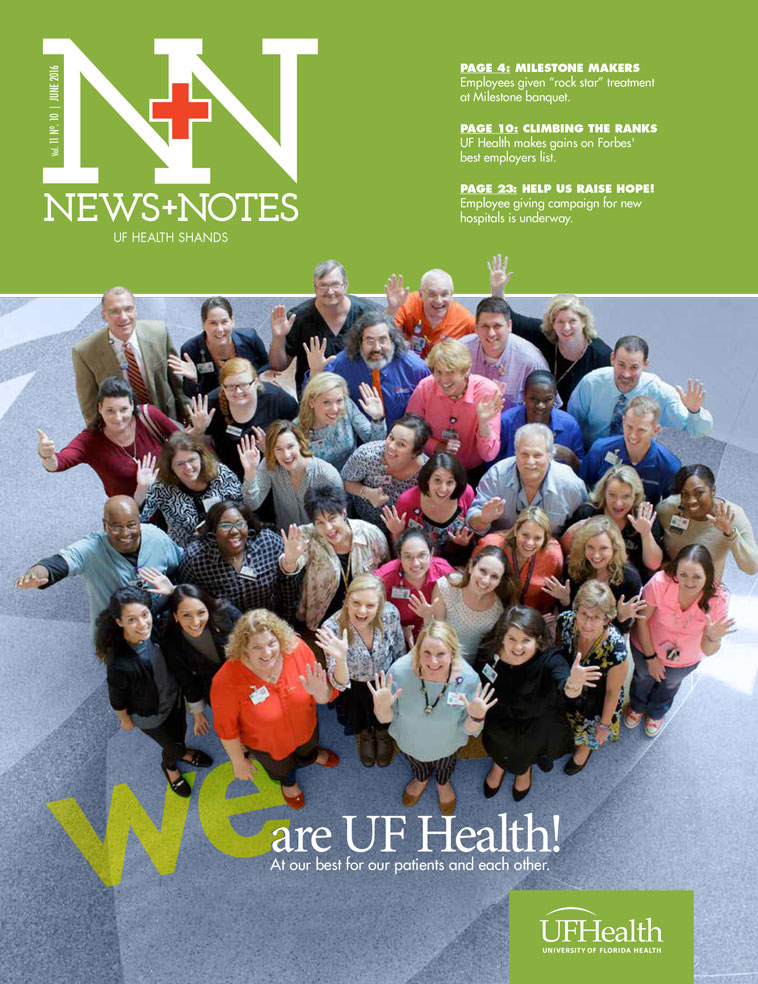